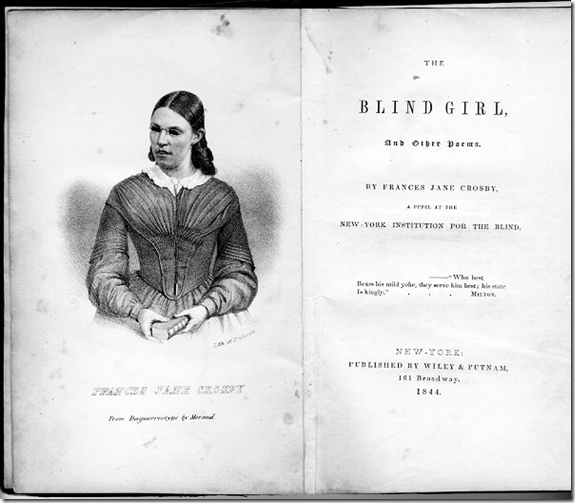 It seemed in­tend­ed by the bless­ed prov­i­dence of God that I should be blind all my life, and I thank him for the dis­pen­sa­tion. If per­fect earth­ly sight were of­fered me to­mor­row I would not ac­cept it. I might not have sung hymns to the praise of God if I had been dis­tract­ed by the beau­ti­ful and in­ter­est­ing things about me.

In her life­time, Fan­ny Cros­by was one of the best known wo­men in the Unit­ed States. To this day, the vast ma­jor­i­ty of Amer­i­can hymn­als con­tain her work.

On March 24, 1820, in a little country home in Putnam County, New York, John and Marcy Crosby were blessed with their third daughter, Frances Jane. Marcy was only 20 years old at the time Frances was born. This was a strong, loving family with deep Puritan roots. The great-grandfather of this little girl, who was better known as “Fanny,” had fought in the Revolution. So also had another relative of hers, Enoch Crosby, who would later become one of the heroes in the classic novels of James Fenimore Cooper. Some of Fanny’s more distant relatives were noted scholastics who had helped to found Harvard College. As one author noted, Fanny Crosby was of “sturdy New England stock.” A true colonial thoroughbred!

When just six weeks old, Fanny developed an eye infection. A less than competent physician sought to treat the infection by placing very hot poultices on her eyelids. Although the infection did indeed clear up, the treatment left scars on her eyes, leaving her blinded for life. She was, however, still able to detect light, thus could distinguish between day and night. When she was only a year old a second major trauma befell her with the death of her father, which left her mother a widow at the age of only 21. Forced to care for four small children, three daughters and a son, Marcy Crosby hired herself out as a maid. Thus, the children were largely looked after by the grandmother, Eunice Crosby.

Fanny developed a very close relationship with her grandmother. The two were inseparable, with the latter becoming the “eyes to the world” for the former. They would spend hours in the meadow together, with Eunice vividly describing the beauty of God’s creation all around them. She also read the Bible to Fanny, and explained to her the value of prayer and a relationship with God. It was soon discovered that the little girl had a phenomenal memory and retained almost everything read to her. At the age of ten she had committed to memory, and could repeat without error, the entire Pentateuch, all four Gospels, many of the Psalms, all of Proverbs, and the entire books of Ruth and Song of Solomon. At the close of her life she stated, “The Holy Book has nurtured my entire life.”

Fanny refused to feel sorry for herself because of her blindness, and she did not let it hinder her from engaging in a full and active lifestyle. She wrote, “I could climb a tree like a squirrel and ride a horse bareback.” She actually thankedGod for her blindness, as she felt it contributed to her greater spiritual gifts. Fanny wrote, “It seemed intended by the blessed providence of God that I should be blind all my life, and I thank Him for the dispensation. If perfect earthly sight were offered me tomorrow I would not accept it. I might not have sung hymns to the praise of God if I had been distracted by the beautiful and interesting things about me.” When only eight years old she composed the following poem:

Oh, what a happy child I am, although I cannot see!

I am resolved that in this world contented I will be!

How many blessings I enjoy that other people don’t!

So weep or sigh because I’m blind, I cannot — nor I won’t!

When Fanny was nine years old, the family left behind the old homestead and moved to Ridgefield, Connecticut. She would live here for the next six years, developing a very close relationship with their landlady, a Mrs. Hawley, who was of the family of the noted Senator Hawley. It was here that she also met Sylvester Main, the man who would later compose the music for many of her best loved hymns. Just a few weeks before her fifteenth birthday, on March 3, 1835, Fanny left for New York City where she became a student at the New York Institute for the Blind. She was a fabulous student and loved all of her course work … except for one subject! About that subject she wrote:

I loathe, abhor, it makes me sick,

To hear the word — Arithmetic!

“Fanny Crosby was very small in appearance, less than five feet tall, and she weighed no more than one hundred pounds. She was said to have been a physically unattractive person — a long face, prominent front teeth with a gap between them, thick, wavy hair parted in the middle and pulled backward in curls that hung to the shoulders, and always the dark, rectangular glasses obscuring her sightless eyes. Yet, when she spoke, it is said that there was an unusual charisma about her, as her face lit up with an expression that gave her great charm and attractiveness” (Kenneth Osbeck, 101 More Hymn Stories, p. 239-240). Fanny was “known for her musical abilities as well as a talent for writing poetry. She had a fine soprano voice as well as being accomplished in playing the guitar, harp, piano, and organ. She was also well-versed in the great classics of music. She wrote some tunes for her texts but generally did not want them used, for she felt that they were too complicated for ordinary people to sing” (ibid, p. 239). To the end of her life — she lived to be 95 — Fanny would sit often at the piano and play everything from hymns to classical pieces to ragtime!

After completing her studies at the Institute, she served as one of their instructors until 1858, teaching language and history. On March 5, 1858, she married Alexander van Alystyne, who was also blind, and also a teacher at the Institute. Alexander was an accomplished musician, and was well-known in New York as an organist. A child was born to them the next year, but, sadly, it died in infancy. This was a personal tragedy of which Fanny refused to speak for the remainder of her life. Her husband died in 1902 in Brooklyn, New York, where they had spent their lives together.

Fanny J. Crosby loved the Lord. She devoted her life not only to praising Him in song, but to reaching out to others with the love of Christ Jesus. It was her desire, and fervent prayer to God, that He would allow her to touch a million hearts for Christ during her lifetime through her music. She certainly has done that … and more! She wrote more than nine thousand hymns, many of which are among the most beloved in the church. They have been sung by, and have touched the lives of, countless millions. She also regarded the New York bowery district as her special mission field. She would spend several days each week there, and often referred to the derelicts as “her boys.” Of this benevolent effort she wrote, “It is the most wonderful work in the world, and it gives such an opportunity for love. That is all people want — love.”

“Though partial to the Methodist Church, Fanny Crosby was a friend of all believers who ‘loved Jesus and accepted the Scriptures.’ She frequently attended the Plymouth Congregational Church in Brooklyn to hear Henry Ward Beecher, her favorite preacher. She also liked to visit the Fifth Avenue Presbyterian Church and the Trinity Episcopal Church, especially when the dynamic Phillips Brooks was guest speaker” (Kenneth Osbeck, 101 More Hymn Stories, p. 239).

Fanny’s dear mother died in 1890, having lived into her 90’s. At this time Fanny left her home in Brooklyn and moved to Bridgeport, Connecticut where she moved in with her sisters. It is said that this wonderful Christian woman might have been very rich if she hadn’t shared almost everything she received with the poor people around her. She was known to say, “Where selfishness is, there happiness cannot be found!” She never complained, and always sought to bring cheer to the lives of others. “I have made up my mind,” she wrote, “never to become a disagreeable old woman, and always to take cheer and sunshine with me.” On February 11, 1915, she dictated a letter of comfort and encouragement to a grieving friend, went to bed afterward, and passed peacefully from this life during the night. Fanny had once written, “If I had a choice, I would still choose to remain blind … for when I die, the first face I will ever see will be the face of my blessed Savior!”

Blessed assurance, Jesus is mine!
O what a foretaste of glory divine!
Heir of salvation, purchase of God,
Born of His Spirit, washed in His blood.

Perfect submission, perfect delight,
Visions of rapture now burst on my sight;
Angels descending bring from above
Echoes of mercy, whispers of love.

Perfect submission, all is at rest;
I in my Savior am happy and blest;
Watching and waiting, looking above,
Filled with His goodness, lost in His love.